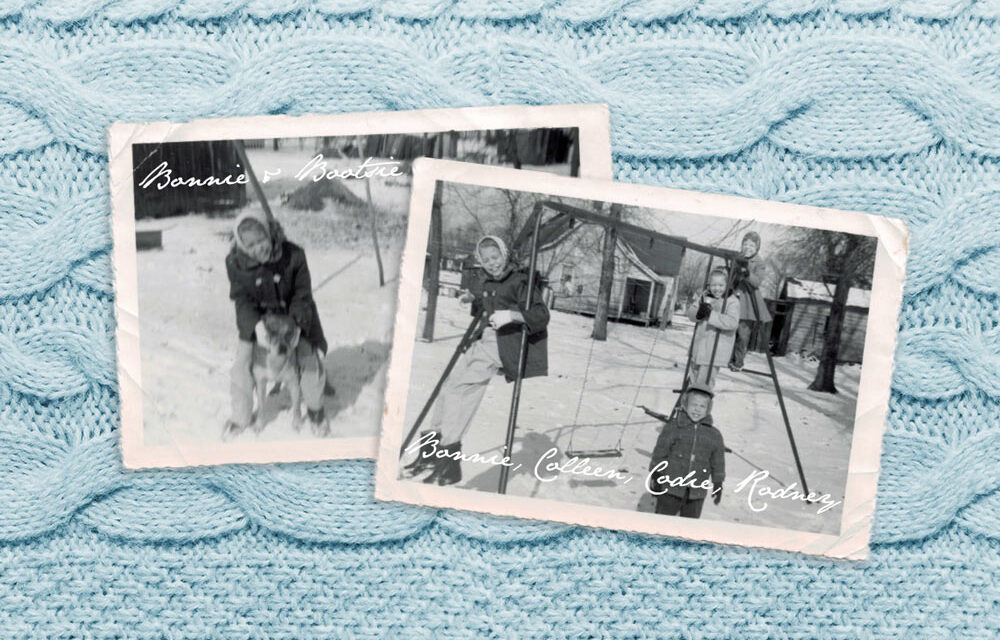 How do you describe waking to the first snow of the winter season?  The sight brings different emotions to each of us.  There are soft hues of amber pushing back layers of lavenders from the night sky, as a low-lying sun fights to send its light and warmth.  For some, it’s a brief view of beauty followed by frustration at having to alter normal routines.  Others will gaze out on the wintry wonderland and feel their hearts fill with a rare and unexpected peace.

Peace comes to Ann as she stands peering out at Sunnyside from the canning porch window, taking in the beauty of the downy white snow, at least two inches and more still falling.  Every available surface is covered, masking the marred imperfection of her world, almost convincing her that those flaws aren’t really there.  Until the snow melts, she can pretend her world is perfect and peaceful.  Closing her eyes and raising her face to the sun’s warm rays she reflects on how hard this year has been.  Rollie passed away so suddenly, forcing her to fly home and move the children from California to Sunnyside.  Living with Mother has been such a refuge while she looked for work to support her family and a place for them to live.  She’s determined to do this on her own. 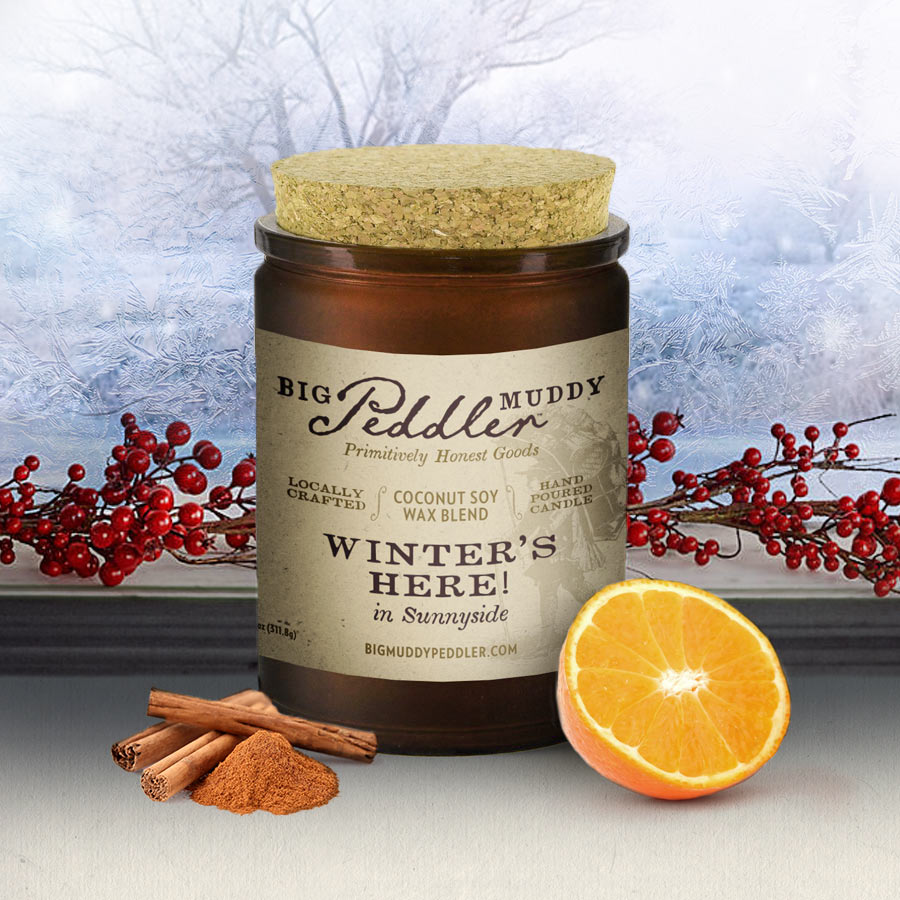 “I suspect it will be four inches by end of day,” Grandma Della remarks as she steps up beside Ann, handing over a cup of that delicious spiced coffee, Della’s own secret recipe.  Taking the cup and breathing in the spicy freshness of coffee, clove and cinnamon, Ann replies, “Yeah, I suspect so.”  Ann looks over her shoulder at the canning porch shelves and thinks that at least there’s enough food after all of the preserving they had just put up during the past three months.  “Thank goodness Harry had the coal delivered last week,” Della says as she sighs and turns to step into the kitchen to start breakfast.

Ann continues to lean against the window frame basking in the serene landscape, taking advantage of this rare quiet moment to remember Rollie, and to send up a thank you prayer for the small blessing of peace.  That is, until she hears the one-booted thumping, door slamming, and girl squealing coming from the other end of the house.  With eyes raised heavenward she scolds Rollie, “Your son has discovered it has snowed overnight.” Resigned to the task of starting her day, she lets go of the peace and turns toward the noise and excitement.

Following the sound of Little Rodney’s shouts, Ann heads towards the front of the house.  “It snows-ing outside Cookie!  Come see!” can be heard clear through to the kitchen, confirming that Rodney is the first to wake and discover that it snowed overnight.  Also confirming he is the source of the commotion.   She reaches the living room to discover the siblings and their mutt Bootsy leaning, tallest to shortest, against the back of the sofa, gazing at the winter wonderland.  Four faces and a nose perfectly outlined by sleeve-cleared ovals, or in Bootsy’s case, doggie breath, peer out at the wondrous miracle of feathery ice crystals covering every surface.

A flash of red causes four heads to turn as movement down the street catches their eye.  Ann leans around the corner to peek out the window on the front door and notices the Davis boys are out.  Looks like they’ve gotten a head start.  The kids will be wanting to head out and join them.   She can almost see the anticipation building in their little minds, better go and check to see how breakfast is coming along.

Ann turns and heads back to the kitchen to help Grandma Della and start gathering together the extra layers of winter clothing suitable for playing in the snow.

In the bedrooms, laying out extra thick socks, sweaters, undershirts and pants, two of each, she can’t help but overhear them planning for their winter campaign against the Davis boys.  She smiles to herself and looks again heavenward to Rollie.

“Don’t matter that we lose,” she hears Bonnie say, “they’re gonna learn a lesson about us Sullivans.  We’re not afraid of them and we stick together.”

“Yeah Toeball Fight!” hopped up Rodney, eager to get out into the snow.  “Et’s get ’em,” joined Colleen.

They come marching into the bedrooms in unison to grab their winter gear.  “Hold it!” commands Ann, chuckling, as a little more weight is lifting from her heart.  Feeling thankful that they were all going to be okay.  “Breakfast first, you can’t launch a major offensive on an empty stomach.”

Drat! The major offensive against the Davis boys will have to wait until after breakfast.

“But why do I have to put on more socks, Mama? I already have on one pair,” whines Rodney.   Ann pushes, tugs and yanks as she continues to pull a second pair of socks, pants and sweater on to Rodney.  “Because my Mama always said you have to wear two of everything,” Ann says breathlessly, blowing a curl from her face.  “If you want to play in the snow you have to have two,” Ann snaps up the last of Rodney’s coat and places a hat on his head.

“Just like Noah, we learned about in Sunday School?  God said, if you want to ride in the boat, you had to have two of everything,” Rodney says, clearly understanding now.  “Something like that,” she says smiling, “All set, you’re ready to go.” Rodney quickly escapes Ann’s hug and bounds out the backdoor to catch up to the others who had finished dressing in their own additional clothing and were already outside.  She follows him out onto the back steps to make sure he and the others are managing alright in the snow.  When the frosty air fills her nose, it has a bite to it much like the smell of the clove and cinnamon from Grandma Della’s coffee.  Icicles hanging off the shrubs are making the winterberries put off a crisp fruity smell, almost citrusy, reminding her of the frosty fruit ices she buys the kids at the drug store.

“Like this, Bonnie?” Colleen asks as she falls onto her back into the snow, “X..I..X..I,” calls Colleen as she begins to wave her arms and legs into the forms of the letter X and the letter I, back and forth.  “Am I an Angel?”  Colleen stands to admire her work, “I make a pretty Angel”, she says smiling.  “Real pretty”, said Bonnie.

“Bonnie, where do we get the toes for the toeballs?” asks Rodney.  Bonnie stares at her little brother in bewilderment.  Brows drawn she says, “There are no toes, Rodney.  It’s a SNOWball fight, we’re making snowballs not toeballs”.   Chuckling, Ann turns to head back inside, questioning their odds of even making it through the first volley of snowballs in this war against the Davis’s.  That Mikey has quite the arm, and aim.

Della looks up from washing the morning dishes as Ann returns from the backyard.  While handing Ann another cup of that special spiced coffee she asks, “What has you so tickled”?  Taking the cup with a quick nod of thanks, Ann sits down at the table.   “Oh,” she replies, closing her eyes, taking in a deep breath and gathering together the words to explain what she’s feeling.  The scents from outside lingering on her clothes mingle with the smells she picked up in the kitchen.   This is the smell you wait all year for.  This is the smell that can make you think of the first snow.  The bite of the cold wind like the clove and cinnamon of the spiced coffee.  The fresh crisp frost like the citrusy winterberries from the frozen bushes.  Finally, the soft downy and warm feel of the afternoon sun melting away the snow like the smooth warm flavor of the French Vanilla in pancakes.  She opens her eyes and genuinely smiles at her mother, surprising herself, not being able to remember the last time she was able to smile like that.   “It’s just that I love the smell of the first snow, and I think the children are going to be alright.”

Sign in Create an Account
Lost your password?
Select the fields to be shown. Others will be hidden. Drag and drop to rearrange the order.
Click outside to hide the comparison bar
Compare
Compare ×
Let's Compare! Continue shopping
Shopping cart close